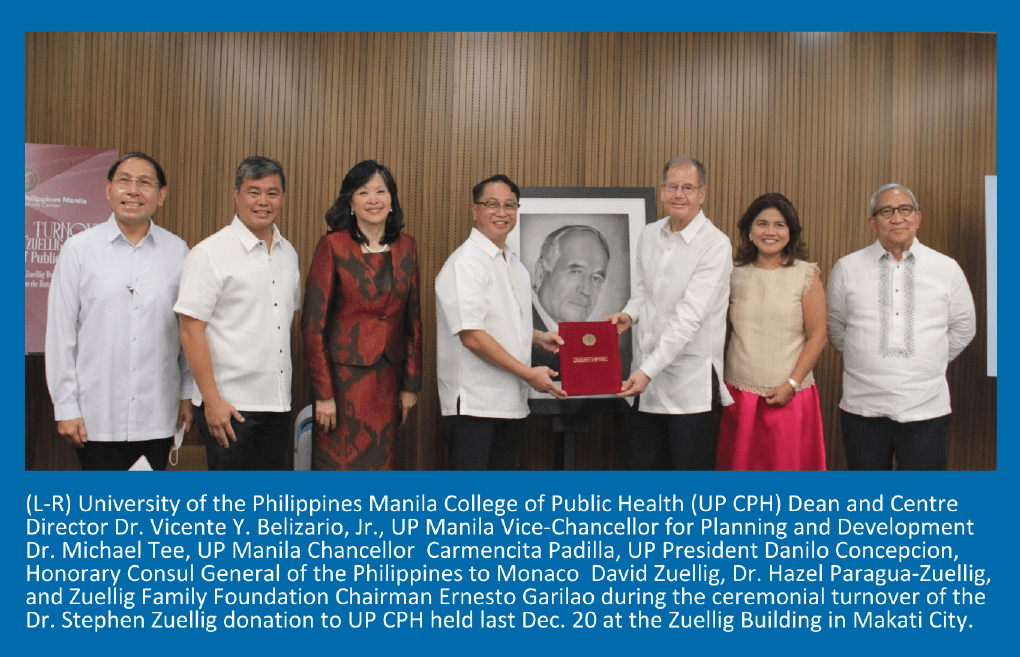 Dr. Stephen Zuellig donation to UP Manila to promote health equity
The University of the Philippines Manila College of Public Health (UP CPH) accepted a $4.3-million donation to build a 12-story facility and a $500,000 fund for two programs from the family of the late Dr. Stephen Zuellig, the founder of the Zuellig Family Foundation (ZFF).

During the ceremonial turnover held last Dec. 20 at the Zuellig Building in Makati City, Honorary Consul General of the Philippines to Monaco David Zuellig, son of Dr. Stephen, said that the donation recognizes the critical role of UP CPH as a training institution in reducing health inequity. Since 2014, ZFF has partnered with the UP CPH in delivering health leadership and governance training to mayors. He hopes that the grant will turn the training for mayors into a program leading to a master’s degree in health leadership and governance.

In his acceptance speech, UP President Danilo Concepcion shared his sentiments through a quote by Albert Pike as recalled from a tribute by Former Foreign Affairs Secretary Alberto Romulo to Dr. Zuellig: “What we have done for ourselves alone dies with us; what we have done for others and the world remains and is immortal.”

The two programs will support the health and leadership initiative of ZFF, which focuses on strengthening local health leadership and governance through training, coaching, and mentoring local chief executives. The two programs will also engage the university and academic partners in improving health leadership and governance, conduct multidisciplinary research, and provide technical support in making policies toward health equity. These objectives reflect Dr. Zuellig’s passion for providing accessible health care to the disadvantaged and vulnerable communities, Concepcion said.

Addressing health inequities
National Scientist Ernesto Domingo, University Professor Emeritus of UP Manila, noted how ZFF provided opportunities for the Universal Health Care (UHC) Study Group of UP Manila to present UHC as the solution to health inequities to mayors and governors. Through the Dr. Stephen Zuellig donation, he hopes that UP CPH will eventually elevate its health equity program to a center.

Dr. Vicente Y. Belizario, Jr., the Dean and Centre Director of the UP CPH, expressed gratitude to the Zuellig family and commitment to continue the legacy of Dr. Stephen Zuellig in promoting health equity and contributing to health systems strengthening. “We look forward to moving closer to the golden age of public health in the Philippines. We have to work in partnerships and collaborations with as many sectors as possible, with UP leading the academic front in teaching, research, and public service,” Belizario said.

Years in the making
The intention behind Dr. Stephen Zuellig’s donation was to contribute to the rehabilitation efforts in the aftermath of super typhoon Haiyan (Yolanda). During the ceremonial turnover of the donation, UP Manila Chancellor Carmencita Padilla narrated the initial plan to rebuild the campus of the UP Manila School of Sciences in Palo, Leyte. But she declined the donation because the proposed site for the building was still in the planning stage then.

By 2016, a donation for the construction of a building for the UP CPH, and funding for two programs on public health were confirmed, instead. Padilla recalled that Dr. Zuellig was to personally jump-start the construction to coincide with his 100th birthday celebration. Unfortunately, he passed away in January 2017 and the plans for the building were put on hold.

Thanks to the Zuellig family for being steadfast in fulfilling Dr. Zuellig’s wish, which resonates with ZFF’s commitment to reducing health inequities toward better health outcomes for every Filipino, especially the poor.